Funnel Hacking Live 2019 in Nashville By ClickFunnels: My Key Takeaways

It’s hard to believe but the Funnel Hacking Live event 2019 in Nashville is over and I got back home with key takeaways I’d like to share with you… But before doing so let me give you a context of what FHL and all the movement behind it is about in case you don’t know.

In the past, I used to attend different conferences, live events, and seminars. However, one thing that makes FHL unique and memorable is that it’s not just the event full of mind-blowing and life-changing content; it’s more than that – it’s a MOVEMENT you will never be able to forget!

From the very first minute they make you feel you are a part of a big movement and a community. We call ourselves ‘funnel hackers’ and what we do is identifying patterns of business success and modeling it to ours – not copying but replicating whatever works instead of re-inventing the wheel.

This was first time I attended the FHL which was hosted by ClickFunnels (what is ClickFunnels?) and the first thing that crossed my mind was that I got hooked up and I must keep attending it every year.

I did my best to take photos and record videos to recreate a feeling as if you as a reader were there but realistically no written word, image or a video can convey the real life experience you get at FHL. 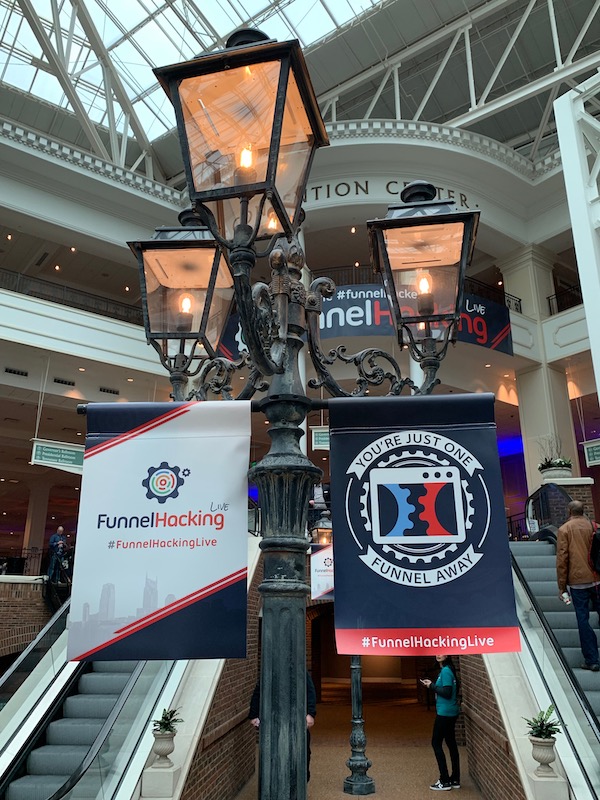 Cohort of speakers this year was mind-blowing in terms of intensity, value and world class content. Generally speaking, four days of the event were thoughtfully planned and sequenced. Each day had its own purpose and theme.

Day 1 started with the foundation setting the tone for the next three days. The second day was all about the funnels, mechanics and psychology behind them. In day three we deep dived into traffic. And the last day was all about leaving impact and legacy.

Here are the speakers who rocked on the stage for four days:

Matt Maddix: “How To Raise A Young Entrepreneur”

Russell Brunson: “Traffic Secrets – How To Fill Your Funnels And Make It Rain”

John Parkes: “Ancient Gods & The Epic Battle For Your Traffic”

Myron Golden: “How To Sell”

Russell Brunson: “The Secrets Of The Two Comma Club”

This is another project by Clickfunnels launched recently which is a kind of digital rolodex created to make hiring highly-skilled experts way easier. With Funnel Rolodex you can quickly find any help you need to build and grow your business online, including funnel strategists, copywriters, designers, funnel builders, and much more. If you need any help with building a funnel or funnel strategies for your business, you can easily find me in the Funnel Rolodex as well.

Thus, I spent almost three hours networking with industry experts and walking through the booths and familiarizing myself with the tools and services currently available in the market.

What would be like if you could sit at a table with a Two Comma Club award winner (someone who made at least a million dollar through one funnel) and learn from  them as they share their expertise on traffic, storytelling, funnel building, and more. This is exactly what ‘Round Table Discussions’ was about on the second day at FHL. 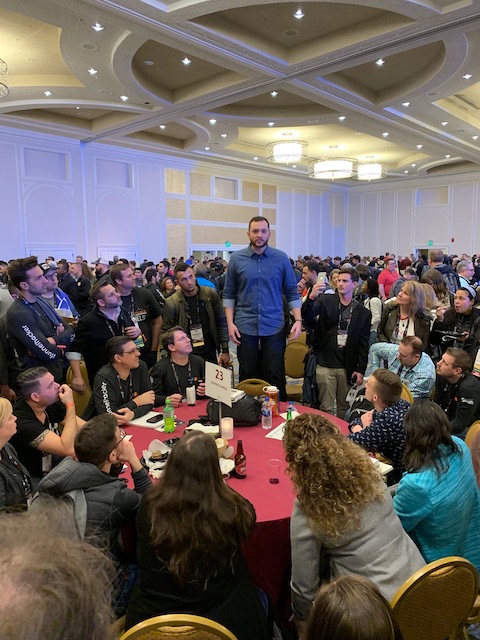 This award ceremony at Funnel Hacking Live event resembles the Oscar and Grammy Award ceremonies but in a business world. Tribute is being given on stage to those who made at least one million and ten million dollars through their funnels. This is very inspiring for those who are watching in the ballroom and it’s a moment of pride and fame for those on the stage receiving these awards! Some of them a year ago were sitting like everyone else in the room but thanks to their hard work and determination they were on the stage as Two Comma Club Members. 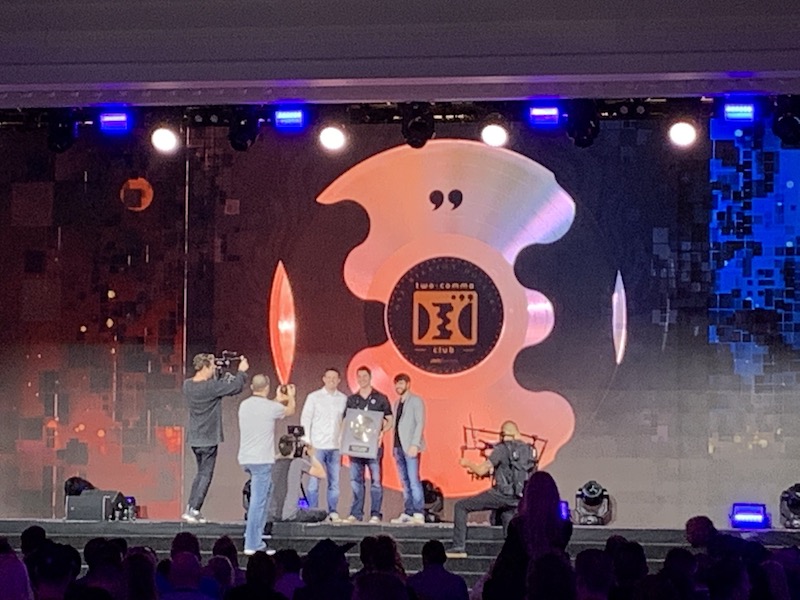 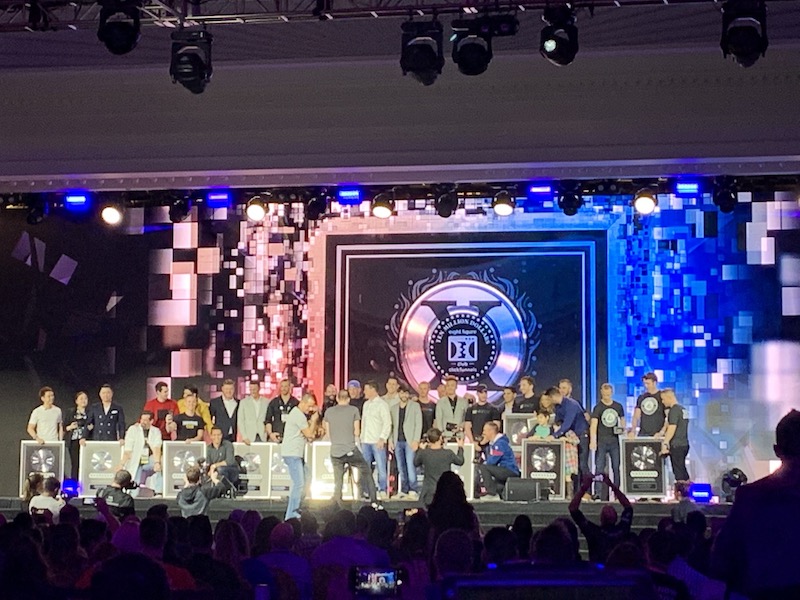 The 4-day event was wrapped up by an amazing private concert by Lindsey Sterling who took the stage by storm with her mesmerizing performance and high energy.

Here are some photos and excerpts from the concert: 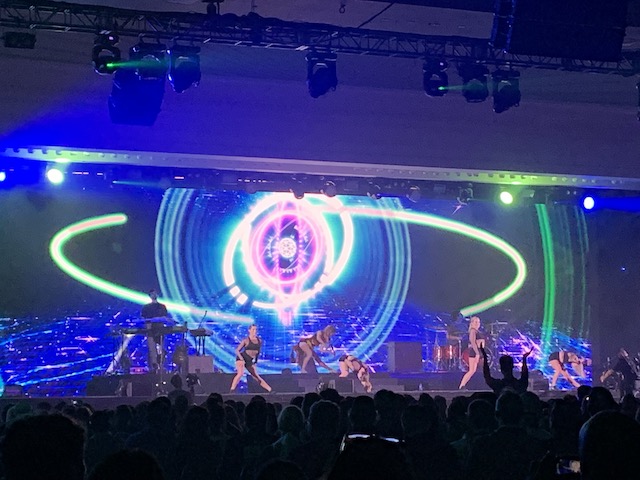 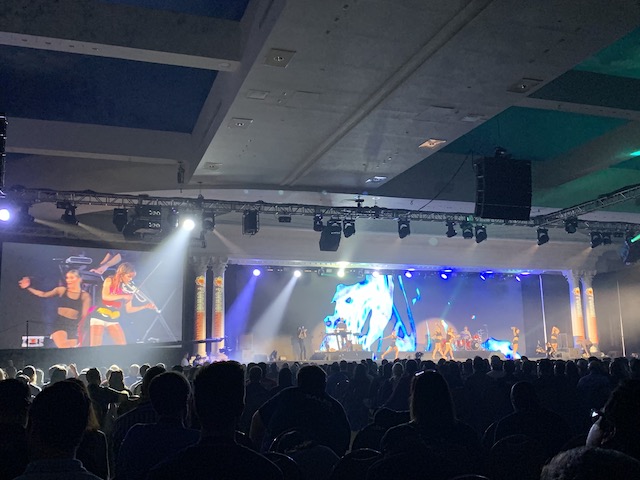 As you already got a sense of what this event was about here are some of my main takeaways from FHL I wanted to share with you: 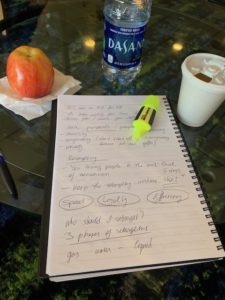 (1) Why sharing your story with people and why it matters?

The easiest way for people to know you, like you and trust you is to share your story. People tend to connect with your pain more than with your success You need to be willing to be more vulnerable to impact more people. When you share your story and fears you take the power from people’s hands and put it into your own hands (Nicholas & Amanda Bayerle).

(2) The person who you should sell to first is YOU.

This comes down to a self-confidence and loving what you do so much that not selling it to others can be viewed as a disservice. In other words, if you fear to sell something to others it means firstly you are not obsessed of what you do, and secondly you eventually doubt your success and people can smell that right away (Dean Graziosi).

We know that in 99% of instances the success comes to those who do not give up and do not deviate from the set goal. Giving up is like not believing yourself well enough that you’re worthy of pursuing your goal and dreams. This is why it’s always your choice to do so but not an option. The best way to summarize this postulate is in words of Ray Higdon, “keep going because quitting will never increase your speed.”

(4) Make your actions your focus.

Ultimately, it doesn’t matter what you feel; what matters is what you do. As they say your actions are louder than words. And, to become a force that is loud, we must grow behind the closed doors. Because the most powerful force on the earth is a human soul on fire and and life on purpose (Jaime Cross).

(5) Time is more valuable than money.

Never say, ‘time is money because time is more valuable than money!’ By resolving ‘Elapse-Collapse Paradox’ you start thinking of wealth in terms of time not money. For example, poor people elapse their time and let their time go by focusing on not important things (e.g. watching TV, etc.). Rich people collapse their time by focusing more on income producing activities.

For example, an average yearly salary is 40K per year. In 25 years, you’ll make one million dollar, assuming you keep receiving your 40K paycheck for 25 years. This is an example of elapsing time. Now, if you learn how to make one million dollar per year instead of 25 years, this would be an example of collapsing time. It’s easier to make a lot of money in a short period of time than make little money over a long period of time. This all comes down to a truth that in business you have to go faster and more efficient. Would you run or ride a bicycle? (Myron Golden).

(6) Selling is the most noble profession in the world.

First sell to yourself then sell it to others. ‘Selling’ is oftentimes viewed as shady action and ‘sellers’ – as untrustworthy people. That’s why they say people love to buy but hate to be sold. Well, it is not fully accurate because, as a matter of fact, what people don’t love is to be convinced. And on the other hand, the persuasion is when you help them to make decision to buy. (Myron Golden)

(7) Power of words and stories.

Story makes people emotional. What story does is make your buyers thirsty and copy makes your product sell. However, if a story is good enough but copy sucks, your product will still sell. (Jim Edwards)

In order to go up according to the law of advancement everything in life and nature goes down first. For example, before they can build a building which can raise, first they need to dig a foundation and go down. In nature, any seed of a plant or tree should first go down into the soil and spreads the roots before it goes up and turns into a tree. The morale here is you need to be willing to go down before you go up and advance. But you should not be willing to be a seed all the time; you need to grow to become a tree! (Myron Golden)

These are my main takeaways I got from Funnel Hacking Live event in Nashville and wanted to share here. None of them are listed here in order of importance and priority. The sequence and order of key takeaways is random.

Flying over New York and heading to Nashville

Got registered and ready for the FHL to start

I met Ben Moote at his booth at Funnel Rolodex. He is the man who dissects and hacks million dollar funnels.

With Mikael Dia, a founder of Funnelytics

With James Hurst, a creator of CF Follow Up Pro at his booth

With folks at a Buildapreneur meetup (FHL 2019)

With Peng Joon, a worldwide speaker on business, entrepreneurship and personal growth

About the Author: Arthur Khoyetsyan

Arthur Khoyetsyan is an entrepreneur, author and high- performance consultant who specializes in helping other entrepreneurs and business owners get paid for what they know and not for what they do. Arthur’s passion is to share his skills, knowledge and expertise to help other entrepreneurs share their own message with the world and truly monetize their work experiences, knowledge and the wisdom they have gathered throughout a lifetime.
Thanks for subscribing!