The Power of Spoken Words: Linguo-stylistic Secrets of Winning Oratory Speeches by American and British Politicians

Whether written or spoken, words have the power to break and build, hurt and heal. In the context of political speeches where stakes are so high, public speakers use words as the only instruments to influence the masses…

This is the first time ever I am making my PhD thesis available to a wider public since 2003. More so, the abstract is now available on Amazon. People kept asking me what my thesis was about and I decided to put together an executive summary and make it available for those who might be interested in the research I did :).

The thesis investigates the linguo-stylistic analysis of political discourse through the exploitation of textual categories such as modality. The choice of political speech as research material in a dissertation is conditioned by the available high coefficient of modality and the specific characteristics of its expression and implementation, particularly in oratory speeches. Distinctive features of modality expression in oratory speeches are the simultaneous interplay of logical, psychological and emotional factors that altogether make public speech more impressive. The study is based on factual materials, i.e., important political speeches by the UK prime ministers and the US presidents on the topic of war / terrorism and peace. 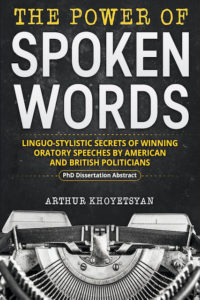 The overarching goal of the research is to understand the role of argumentation in oratory speech through the expression and implementation of modality, and the more specific role is to analyze those linguistic and stylistic means with the help of which the speaker exerts influence on the audience. Research topicality is conditioned by the need to explore the author’s modality and its expression means in oratory speeches, which has been brought into focus both in the domestic and foreign science of linguistics and by increasing interest in modern society towards mastering public speaking skills resulting from the process of democratization in
our country.

The scientific novelty of the research is an attempt, for the first time, to study the style-forming function of the category of modality in oratory speeches, given the extra-linguistic factors (endemic mentality, national distinctive features, historic, cultural, social and psychological elements of perception, along with place, time and audience of public speaking), which heavily influence the modality coefficient. In addition, stylistically analyzed linguistic means being directly involved in the expression of modality in oratory speech are considered, per se, to be the means of argumentation through which the author’s attitude is reflected towards objective realities.

The theoretical value of the research is the elaboration of the author’s evaluative modality that constitutes an essential part of the “argumentation-modality-style” triad concerned in the thesis and development of linguistic means analysis methodology in oratory speeches. The research results allow for deducing that modality in oratory speech is defined as a functional- communicative category, which directly contributes to the creation of the public speaker’s individual style and together with all its linguistic, psychological, cultural, social and political characteristic features, performs a characteristic function that, eventually, connects the author’s feedback with his/her audience and serves to exert an effective impact on the latter.

The full abstract is available on Amazon. Inside the abstract you can find a link to a full copy of the dissertation in Russian.

About the Author: Arthur Khoyetsyan

Arthur Khoyetsyan is an entrepreneur, author and high- performance consultant who specializes in helping other entrepreneurs and business owners get paid for what they know and not for what they do. Arthur’s passion is to share his skills, knowledge and expertise to help other entrepreneurs share their own message with the world and truly monetize their work experiences, knowledge and the wisdom they have gathered throughout a lifetime.
Thanks for subscribing!